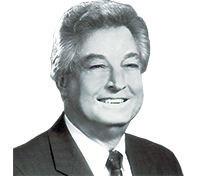 As vice president of marketing for a major propane supplier, Bill Byrne was connected to the industry – not just through the pipelines that carried product to his customers but also to the committees, boards and government agencies that influenced businesses.

It was his quiet, personable demeanor that allowed him to communicate effectively with the bobtail driver or the executive in the boardroom. And when issues arose that begged for direction, he had a special way to lend a hand – and a solution.

“He would sit there quiet and listen, and after he let everybody have their say, he would nail it,” says Charles Sawyer, former owner of Sawyer Gas and an LP Gas Hall of Famer. “He would bring everyone’s thoughts and issues together where everybody agreed with him. I always thought of him to be sneaky smart.”

Byrne, who spent 40 years with Tulsa, Okla.-based Warren Petroleum Co., believes his work with government agencies and the relationships he built with them and other key company officials helped define his career.

The National Propane Gas Association (NPGA) named Byrne the Bill Hill Award winner in 1992. The honor goes to a propane industry member who has contributed in public affairs at the national, state or local levels.

“I had access to heads of most of these chairmen and presidents of producing companies,” says Byrne, 86, a graduate of Mississippi College and the University of Oklahoma who started working for Warren Petroleum in 1951.

Byrne served in numerous sales roles across the country before becoming a vice president of Warren Petroleum, Chevron’s gas liquids division, in 1977.
One of the more informed industry leaders on gas liquid supplies, Byrne was a regular speaker at industry events during the price control era of the 1970s. He spoke about the “propane dilemma” of the time – the control era’s impact on supply and how companies operated under new regulations.

“Bill was one of the most knowledgeable people in the industry,” says Jim Bertelsmeyer, founder and former CEO of Heritage Propane. “When marketers would get together and questions would come up about supply for the industry, Bill was always the guy they looked to for an educated opinion.”

Byrne, a Tulsa resident, recalls his involvement in emergency winter meetings in Washington, D.C., as a propane industry representative, amid the threats of seasonal supply shortages. He also remembers meeting with attorneys general from high-use propane states who wanted to overtake propane businesses during a time of product shortages and rising prices.

“I met with seven state attorney generals during those critical couple of weeks, and I convinced them to let us work our problems out,” Byrne explains. “I told them the propane industry was much better prepared to work through this by ourselves.”

Byrne served as president in 1986-87 of what was then known as the National LP-Gas Association board of directors. He sought to get producing companies more involved in the association, and he recalls his work to improve the relationship between the national propane association and the Gas Processors Association. He was also known for publishing an annual analysis of the gas liquids business.

“People always watched for that article and would use it to help plan their business on an annual basis,” says Dan Myers, former CEO of NPGA and an LP Gas Hall of Fame inductee.

Before Squibb-Taylor’s Milford Therrell took steps to rally support for a propane industry checkoff program, Byrne used his producer connections in the 1980s to raise money voluntarily for advertising and promotions. But such an effort wasn’t sustainable, and it became apparent that congressional intervention was necessary.

“So in the long run what happened was Milford took that experience and said we can’t do it on a voluntary effort,” Myers recalls. “He said we need to go to Congress, get a law passed and mandate that everyone join. It wouldn’t have happened if Bill hadn’t tried to get a program resurrected,” similar to a voluntary propane industry effort that had taken place in the 1950s.

Byrne got behind Therrell’s push for a propane checkoff program, and it became a reality. The Propane Education and Research Act of 1996 allowed for the formation of the Propane Education & Research Council, which works on behalf of the industry in safety and training, research and development, and consumer education.

“Guys like Bill Byrne were willing to step out and say this is where we ought to go – voluntary corporate enterprise – and if that didn’t work, let’s latch on to Milford and go all the way to the U.S. Congress,” Myers says.

After Byrne retired from Warren Petroleum in 1992, he became principal of consulting company Byrne & Associates. He was elected to the boards of Heritage Propane, Energy Transfer Partners and Energy Transfer Equity.

Bertelsmeyer, an LP Gas Hall of Famer, had long sought Byrne for the board position with Heritage.

“His leadership background with the NPGA and deep knowledge of the supply and logistics of the industry was invaluable for a new company struggling to gain traction in a crowded group of competitors,” Bertelsmeyer says. “Bill brought to our board the same incisive thought process and pleasant demeanor that had served him so well as he rose through Warren Petroleum and the NPGA.”

What others say about Bill Byrne

“He was very cordial; he made things happen; he was a very good person to have on your team, and he knew how to take care of customers. Warren Petroleum was one of the premier wholesale marketers in the country, and that was Bill’s deal. He was first class, and he wanted to make sure we were first class.” — Dale Delay, Cost Management Solutions

“When I was starting in the industry in the middle ’80s, Warren Petroleum was really the ‘king of the hill’ in NGL supply and logistics, and their leader was Bill Byrne. Of all the leaders I met, Bill was one of the most professional and considerate. He took an interest in people and was supportive and encouraging.” — Bill Gautreaux, Crestwood

“I always looked at Bill as a very friendly and highly competitive but honest and frank person. He probably had the best contact and relationships with the retail marketers across the country of any major oil company personnel.” — Harold Poland, NGL Energy Partners

“I find Bill to be one of the most extraordinary men I have met in the propane industry – an industry filled with so many extraordinary people. Extremely intelligent and successful, yet kind, thoughtful and always looking out for the underdog.” — Rita Pecilunas, Strategic Marketing Resources

“He’s another one of those doers who did a lot of things and went out of his way to do them. He always showed up at all the meetings and had a good personality. I remember if we ever had a worthwhile meeting he was there. He always contributed in one way or another. To me, he seemed like a super guy, and I’m pleased that he’s going to be in the hall of fame. I think he deserves it.” — Sam McTier, Propane Technologies, 2012 LP Gas Hall of Fame inductee