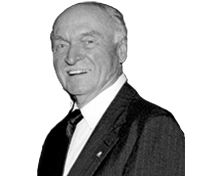 A consummate wordsmith dedicated to keeping the industry informed and active through the pages of Butane-Propane News (BPN), Bill Clark was a stickler for accuracy and grammar.

“Oh my gosh, yes,” recalls Clark’s daughter, Natalie Peal, who is carrying on her late father’s 60-year journalistic legacy as the magazine’s publisher. “He had very high expectations.”

“You always turned the page to see what Bill Clark was saying that month; everyone really looked up to him and wanted to know what Bill thought,” says Bob Myers, an inaugural LP Gas Hall of Fame inductee.

“He picked up on the details and opportunities for the retail propane industry. Bill could put the issues in context and help people understand,” Myers adds. “Bill didn’t try to force himself on the industry – he viewed himself as a spokesman for the industry.”

Myers, a respected executive, consultant and staunch proponent of propane as an engine fuel throughout his long career, remembers Clark “putting the book together on the kitchen table” during BPN’s earlier years.

“It was providing strong leadership where Bill really hit his stride,” he says. “He was one of the few articulate spokespeople we had in this industry for a number of years.”

Clark, who died of illness in 2005 at the age of 88, was especially motivated to provide sharp and insightful coverage of the regulatory atmosphere and was ever vigilant of governmental intrusion and unwarranted interference.

“Bill followed a lot of what was going on in Washington, D.C., and he could interpret things,” Myers says. “In the 1960s, the propane industry was still in its embryonic stages – it was just hitting its stride – and there were a lot of regulations being developed.”

The prevailing opinion among propane marketers was that “they didn’t need the government’s involvement and didn’t want a whole lot of it.”

According to Myers, while Milford Therrell and Glenn Miller – also LP Gas Hall of Famers – were traveling the country convincing the industry to support the legislation, Clark’s columns were promoting the effort through logical arguments, position papers and intelligent perspectives.

Previous PERC-related formative attempts had been slowed by inertia.

“It never got anyplace,” Myers recalls. “People would drop out and nothing would happen, but from day one, Bill was a strong advocate of that effort.”

Clark grew up in Corona, California, majored in journalism at the University of Southern California and served in the Navy during World War II.

Upon returning stateside, he joined the ranks of Jenkins Publications, owner of BPN and Gas Magazine, in Los Angeles.

“It was there that he met my mom (Barbara),” says Peal.

Chilton Co. purchased the two publications in 1956, and from 1958 until 1969 Clark achieved distinction for his BPN editing prowess.

“In 1969, Chilton decided to discontinue BPN, and my dad took over the magazine,” Peal recounts. “From that time on, it was truly a family affair, with the magazine becoming my dad’s baby, the focus of his life. He would pound away on his old manual Royal typewriter, typing with two fingers at an unbelievable pace.”

Clark’s family members also took on important roles with the magazine. Peal remembers tales of her sister, Nanette, working on circulation lists. Once a formal office was established, Peal joined the firm as her father’s production manager. Barbara lent moral support and served occasionally as an office employee.

Peal reports that “working with my father enabled me to understand how intelligent he was, both in business and life. He also introduced me to the propane industry and let me experience the special type of people that comprise it. The propane industry was truly his life – and my mom’s, too.”