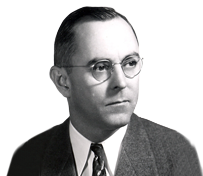 In 1998, the editor wrote: “Before there were overfill prevention devices, cylinder exchange racks or even bobtail trucks, there were a handful of businessmen whose insight and determination guided the early formation of the L.P gas industry almost eight decades ago. H. Emerson Thomas was one of those individuals whose pioneering spirit helped put the fledgling industry on track to grow into the $8 billion industry it has become today.”

Thomas, who died at 98 in 2001, was a vibrant link to the industry’s pioneer period. He co-founded the national  association, which initially moved under the banner, National Bottled Gas Association of America.

Em Thomas “moved the needle” by creating strong early propane companies and leading the association he started with Mark Anton and George Oberfell in 1931. His industry guidance was particularly expressed in safety regulation.

The man who moved with his father to the Oklahoma oil and gas fields at age 6 and worked in them at 13 played a number of roles well. Entrepreneur, trade association leader and mayor were three of his hats. The common denominator was his steel-trap mind, candid and effective communication skill, vision and generosity.

As association leader, Thomas was indispensible in crafting and explaining National Fire Protection Association’s (NFPA) Rule #58, which became the industry’s safety Bible in shaping industry procedures. The regulations lack neither complexity nor subtlety. Those who talk about Thomas characterize him as a master of the intricacy to which those two words point.

He did possess a key advantage. As Jerry Stocker, who now leads New Jersey-based Thomas Associates, told the magazine, “Em made the rules so of course he understood them.”

Yet, as Stocker and another Thomas colleague discussed the patriarch’s role, it becomes clear that Thomas wasn’t simply the one at the table throughout the  committee-intensive process of codifying the regulations. He was a dominant figure because of the meticulously analytical quality of his mind.

Retired now from his executive duties at New Hampshire-based Eastern Propane, Bob Nicholson’s own hats were propane industry leader and banker. Having traveled a long way with Thomas, Nicholson said, “His ability to explain his point and his reasoning were what convinced people to follow his initiative and suggestions. His was the most highly respected opinion in the rule-making process, and he had the experience, the analytical ability and the communication skill to make his points.”

Stocker extended Nicholson’s assessment: “The big thing with Emerson was, ‘Call it as you see it and always tell the truth. ‘”

Nicholson and Stocker each laughed warmly in recollecting Thomas’s legendary frugality. Yet they agreed the patriarch’s tight-fistedness offered a window on the quality of his mind.

Stocker said Thomas would organize large association dinner parties. When the bill came, rather than splitting it evenly among 20 or so attendees, Thomas quickly computed what each owed.

Nicholson added that one night when there might have been near 50 at the tables, Thomas directed that because he was a banker Nicholson be presented with the group check and subsequently celebrated his younger colleague after Nicholson balked at paying an imposed gratuity based on a total that included tax.

Thomas’ frugality was shaped by living through the Depression. But Stocker explained that his mentor was similarly meticulous about many things: the way he dressed, talked, moved in the world, analyzed safety aspects of the propane industry, as well as who owed what. Analytical clarity was Thomas’ strong suit and that attribute showed up consistently.

The quality turned up in a safety regulation experience of Nicholson.

“I pointed out there was no regulation for rust and corrosion in propane tanks,” said Nicholson. “He immediately saw the importance and invited me to speak to an association Technology and Standards Committee meeting in Georgia, even though it wasn’t customary to have a non-member speak. They listened; a safety docket was formed; I became a committee member and safety was strengthened.

“Em was an advocate for improving the standards of today and making them better for the industry tomorrow. He was an activist about improvement. I think Em Thomas was the most respected individual in that committee of around 100 people. “

In the same connection, Nicholson said he was initially dismayed when he observed Thomas fiercely arguing with an association colleague about a rule, only to learn shortly thereafter that the two men were the best of friends. “They were debating the finer points of the rule and not each other’s personalities,” he noted.

Everyone listened when Thomas spoke on the topic of safety, Stocker added.

“From what I saw, Emerson was revered at those association meetings; he was the guru. He knew the nuances as to why something was or wasn’t in the Rule #58 because he had lived through it all and experienced so much, but also because he was so clear in thinking about these issues.”

He had equal dedication to industry communication, Nicholson noted.

“He would go to the national meetings and then go back to New Jersey and carefully tell all the members every thing that had gone on at the meeting. He was a great communicator.”

Although Thomas was a large stockholder in Suburban Propane, his actual business involvement waned after the early years. His primary business was his railroad leasing companies – Suburban Fuel Tank Car Co. and  Continental Tank Car Co.

“Most of his hours, however, were spent with his expert witness work under Thomas Consulting,” Stocker explained. “He was also a 30 percent stockholder and president of Thomas Associates, which was an engineering design firm specializing in the installation of propane peak-shaving plants for utilities and propane standby systems.”

In the industry, Thomas was frequently called “Mr. LP Gas” when he wasn’t simply “Em.” But in Westfield, N.J., where he was the mayor for six years, Thomas was referred to as “Mr. Westfield.”

You don’t get to be called “Mr. Anything” by merely serving as mayor for six years, or by simply being a co-founder of an industry association. The obituaries for Thomas revealed that for more than half a century he was profoundly involved in the community.

That assessment transfers seamlessly to the pioneer’s service to the propane industry: he was a servant leader acting in the best interest of all.