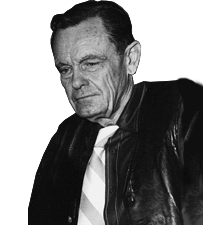 The man in the leather vest sauntered around the garage, talked slowly and, as one colleague puts it, dressed like he was just another guy working in the parts department.

But the man in the leather vest, Herbert V. Hills, wasn’t just another guy working in the shop. Hills, who founded Imperial Machine Products Co. (IMPCO) in 1958 with the profits from his machining company, helped to validate propane as an engine fuel when he and his friend, Richard Baverstock, developed the first diaphragm air valve carburetion systems for propane-powered engines.

Hills was a classic gearhead, as his friend, colleague and fellow LP Gas Hall of Famer Bob Myers recalls. He wasn’t the greatest businessman who ever lived, as evidenced by his willingness to give away equipment and his overwhelming trust in everyone. But Hills had an intense drive to explore and improve engine technology.

“Herb was not a guy who went to conventions and socialized,” says Myers, who worked at Petrolane for 25 years and worked closely with Hills while there. “He had that downhome grin on his face, he never looked at you when he was talking to you and he’d never say much. I never found him in his office. He was always out in the shop.”

According to Don Bass, a longtime Hills friend who worked on the NASCAR circuit before becoming IMPCO’s first employee, engine fuel systems for motor vehicles until the late 1950s were largely equipped with venturi carburetors, which needed a primer or an idle crank to start. Hills introduced his model, the CA300A carburetor, around 1958.

“When the air valve carburetors came out, they would start every time because they generated a strong signal on cranking to pull gas in,” Bass says. “That was the number one thing. When the [CA300A] hit the market, it was like wildfire. All the gas companies starting using the [CA300A] because it was such a revolution.”

Myers agrees Hills’ design is special, particularly compared to venturi models, because of its ability to compensate for altitude.

“There was essentially only one moving part in it when compared to a conventional carburetor,” Myers says. “If you have a typical propane venturi carburetor, when you went to Denver or Salt Lake City you’d have to allow for more air because there’s less oxygen.

“Herb’s air valve didn’t have to tweak. It automatically did, because the air and the fuel were the same ratio. It was a beautiful design, and it revolutionized the propane industry.”

After Hills developed the CA300A carburetor, Bass provided tremendous performance intelligence for him by testing the engine in extreme conditions. The off-road Baja 500 and 1000 races served as ideal learning opportunities.

“I always thought they were promoting propane as a power fuel by entering those races,” says Bob Eggink, the general manager of Gann Products who worked with Hills at IMPCO from 1970 to 1983. “But Don says they were initially done so they could find out what was happening inside that internal combustion engine. They didn’t have the answers, so they wanted to race an engine over extreme conditions.”

After several years, IMPCO had OEM mockups with Ford and General Motors that featured Hills’ system, Bass says. One of the prerequisites for striking a deal with Ford, Bass says, was starting a car in subzero temperatures.

Unfortunately, as Hills, Baverstock, Bass and hot rod pioneer Ak Miller were discovering new possibilities in propane as a motor fuel, IMPCO was running low on cash and forced to sell. A.J. Industries purchased the company, and Hills assumed the role of executive vice president until 1983. But the priorities of the new ownership had changed, Eggink says, hampering propane from reaching its full potential as a motor fuel to OEMs and the public.

“We went from this incredible gain of knowledge, finding out more about propane as a motor fuel, and it abruptly stopped and shifted [at that time] to a money-driven company that was interested in how to best meet shareholder needs,” Eggink says. “Herb Hills wanted a 100 percent best product going out the door. When the new people came in, they were maybe OK with using a little bit of a lesser product. You didn’t have to test every one of those carburetors.”

Despite leaving IMPCO in 1983 at age 73, Hills started another carburetion venture with Baverstock and other colleagues that same year when they formed the OHG Co., also known as the Over the Hill Gang.

“It was an exciting era when we were creating all of that,” Myers says. “The market really piqued in 1983. It was fun to be part of that era, and certainly Herb Hills and IMPCO, to a large extent, made it possible because they had this new, simple technology that didn’t wear out and provided good performance to the customer.”

Those who worked closely with Hills over the years say he was a pleasure because of his traditional values.

“He was old school,” says Patricia Slingerland, Eggink’s wife who worked for IMPCO for 35 years. “I started working for him in 1974. Back then, women were expected to be in the office doing accounting, answering phones and those sorts of things. But no matter what you did for him, he was fiercely loyal to his employees and to the company.”

One act of kindness Slingerland will never forget was when Hills gave her the money to buy a new bicycle so she could get to and from work.

“I was pretty poor when I started working there,” she says. “My bicycle had been stolen, and Mr. Hills gave me the money to buy a new bicycle. He didn’t expect me to pay him back. There were a couple of guys out in the back who had a gambling problem, and he would give them money too.”

Eggink has fond memories of Hills as well.

“One thing I so admired about Herb Hills was every day he came into work, he would greet everybody who worked for him and say good morning,” Eggink says. “If we did have an issue, like I broke a piece of tooling, he had the patience and time to ask, ‘What did you learn?’ The man had a keen sense of not beating people up or belittling them. He wanted you to learn from your errors.”

Hills, who died in 2000, also wanted other early propane autogas proponents like Myers to succeed.

“Herb had a bunch of distributors scattered across the U.S., Europe and Australia,” Myers says. “I couldn’t get equipment for my conversion centers at one point. I called Herb, and he told me to come up one night after work.”

Myers opened his trunk when he arrived, and Hills generously filled it with a carload of equipment to be distributed.

“I don’t think I ever got an invoice from Herb,” Myers says. “Herb was a piece of work. He didn’t care much about business. He just thought propane was a hell of a fuel for the equipment he made.”