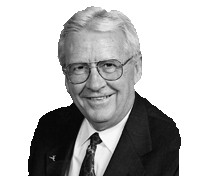 One doesn’t have to look far to find Milford Therrell’s legacy in the propane industry.

His footprint can be found in Washington D.C., at the offices of the Propane Research & Education Council. Therrell championed creation of the checkoff program that generates tens of millions of dollars annually for programs that support safety, training and the development and commercialization of promising propane technologies.

His legacy also can be found on the faces of countless students and graduates from colleges across the country who have benefited from scholarships he and his late wife helped create.

Therrell’s daughter, Betsy Collins, grew up watching the propane equipment salesman win over clients with his charm and care for their needs.

Looking back, Collins said, her father never forgot his humble upbringings as the son of a sharecropper in rural Mississippi. Her father was born in the midst of the Depression in 1933.

She remembers visiting the old family farm, where they grew corn and sweet potatoes.

“They had outdoor plumbing,” she recalled.

The first of his family ever to graduate from college – a feat he accomplished at Memphis State University thanks to the GI bill after serving in the Navy from 1950 to 1952.

Therrell worked his way up the corporate ladder – starting even below the first rung. His daughter remembers traveling around Mississippi as a young girl after her father landed a job as a salesman for Dallas-based Squibb-Taylor Co., a leading distributor of equipment for the LP-Gas and anhydrous ammonia markets. He would talk for hours on end with service-station owners in small towns, winning over their trust and business.

“A handshake and a smile would always seal the deal,” she said.

As he rose up the ladder and wore other hats at Squibb-Taylor, Collins said, her father never forgot where he came from. Even when he was elected mayor of Sunnyvale, Texas, he remained modest.

Her impressions were reinforced recently as she pulled out the many letters he kept from friends and clients over the years until his death in 2008. Collins said many of the letters talked about the respect and care her father showed for the little guy.

“I think he was that way because he was one who started out at the bottom,” she said. “He never made a distinction between a wealthy client or the small one. He didn’t show favoritism.”

And Collins doesn’t have to search long to find an example of her father’s determination to make a friend and forge a friendship. She remembers when her own family adopted a chocolate lab named Jip.

The dog, she said, was always afraid of men and did not take a liking to Therrell, who loved animals.

This troubled her him, Collins said, so one day he declared he was going to WalMart to buy some dog treats. He returned with the treats and took the dog out into the backyard.

She said she marveled as her dad sat in the grass with treats in his hand for two hours before Jip finally came over to him.

“He could just win you over,” she said. “He had an ability to connect with people and animals.”

His ability to charm others led to promotions at work and also within the industry. He worked both on the state and national level to promote propane use. He was the founding chair of the Propane Education and Research Council and president of the National Propane Gas Association.

Roy W. Willis said without Therrell’s tireless work and dogged determination PERC might not exist today. Willis has served as the organization’s president since its inception.

Before PERC’s creation by Congress when it passed the Propane Education and Research Act in 1996, the industry raised money to further education and promotion of propane through voluntary contributions. There was always a greater need than money available.

Therrell used his platform as a leader of NPGA to push legislators to adopt a plan similar to ones already found in agriculture, like beef and cotton, where funds are required to be set aside to promote and grow the industry.

“It takes dogged determination to get legislation like this through Congress,” Willis said. “He had a knack at getting up every day and start calling congressmen and visiting their offices.”

Willis learned Therrell’s penchant for burning up the phone line during his first days working in PERC’s newly created offices.

Among his first callers, Willis said, was Therrell. The phone call lasted a mere hour and a half.

“Milford was an energetic champion of the propane industry,” Willis said. “He never gave up and never quit. He was always working to promote the industy.”

Another memorable call came just a few weeks later, Willis said, when he was in Texas to meet with Therrell and others. The phone in his hotel room rang at 4:30 a.m. Milford’s distinctive, soothing bass voice was on the other end.

“He was an early riser and he went right to work,” Willis noted.

But it was Therrell’s insistence to listen to everyone, Willis insists, that has left a lasting impression. It didn’t matter whether he was talking to a U.S. senator or a small propane dealer – they both had equal access to his ear.

“The most important person in the world was the person right in front of him,” Willis said.

It was this care for clients and unselfish commitment to the industry, said Squibb Taylor President Bill Sands, that led Therrell’s career path from a territory salesman to be appointed president of the company in 1987.

“Through his leadership, Squibb Taylor has risen to achieve worldwide acceptance for innovative and reliable products,” Sands said. Therrell remained the company’s president until his death in 2008.

Meanwhile, he put in countless hours on committees and leadership positions on behalf of NPGA and PERC.

“Milford’s vision for this industry embodied his ideals of making it a better place to work and prosper,” Sands said. “His commitment to our industry can only be looked upon as tireless, dedicated and until the end always looking for another way to make it better.”

“Today, the leaders of our future need to look back at Milford Therrell,” Sands said, “He succeeded when he was told he would fail, he emboldened others to take up the cause, and led all to succeed.”

It was this dream of advancing the industry and creating more opportunities for its workers and companies that that fueled Therrell, said his longtime friend, Glenn Miller.

The pair met in 1967 and served together on the Engine Power Section Committee of NPGA for about 20 years.

“Milford had a deep conviction for the industry’s success,” said Miller, owner of Millers Bottled Gas in Bowling Green, Ky. “There had to be a way to promote the industry to the public, better train employees, promote safety and do this for all levels. He wanted the industry to be responsive to the needs of all size marketers as well as suppliers and manufacturers.”

Therrell had a belief, Miller said, that “if you made your living in the industry you must give back to it” and that led to his friend’s lobbying and perseverance to push for the creation of PERC.

“I think PERC is Milford’s greatest legacy because it impacts all facets of the industry and embodies all those things that need to be done to improve, promote and sustain it for the future,” Miller said. “He taught us by example that we have a voice and we can make it heard if we are willing to organize, set goals and follow a plan.”