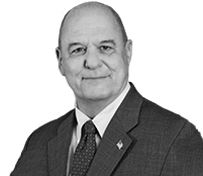 Grace Willis didn’t immediately feel the impact of her father’s July 2017 retirement from the Propane Education & Research Council (PERC) and his departure from its Washington, D.C., offices. Sometimes the daily grind and busyness of one’s work can serve as a distraction.

It wasn’t until Roy Willis and his wife, Margaret, moved to Florida last September that the permanency of the situation felt a little more real.

“It wasn’t seeing him at work; it wasn’t the option to hang out on weekends or after work for dinner,” says Grace Willis, the director of strategic operations at PERC. “When I needed to buy my plane ticket for Thanksgiving, that became very emotional. I’m a very nostalgic person. I hold those memories very close.”

Grace Willis collected those memories over the course of about 10 years working full time for PERC, first as a project manager, as her father served as its first and only president and CEO from 1998 until 2017. Part of her experience of working with “Roy” – as she’s known to call him – was seeing his character traits shine in a professional environment.

“It was so great to see how he treated all of the employees – we were all family,” she says. “To have that perception of who he was in a business setting was unique and humbling. I learned how to approach things with integrity, maintain that integrity regardless of the situation and maintain a sense of humor.”

Grace Willis says her father was “incredibly intense” earlier in his career, but “a seismic shift at one point” in his life gave the Navy veteran a renewed, relaxed outlook. Still, his passion for propane never wavered.

“We had an opportunity to see an industry grow and change, and a lot of that was due in part to the work PERC was doing,” she says. “I feel like we have an impact on things versus just pushing papers around. That gave him a lot of pride for what he was able to do for the industry.”

Under Willis’ leadership, the council pushed into new markets, such as propane school buses and commercial lawn mowers, and helped to develop new technology. But it also faced tense moments, like during a federal government review of the council’s operations and, separately, a six-year restriction on its consumer outreach activities.

“There were plenty of ups and downs, but he was always willing to keep going and not throw in the towel,” says Paula Wilson, former PERC chairwoman who now serves as the council’s director of industry engagement.

Wilson describes the challenge Willis faced bringing a new organization into an industry already set in its business ways. She also admired Willis’ ability to assess a situation, no matter how complex, choose an appropriate course of action and effectively communicate the solution – even if she caught him doodling during a discussion.

Willis was drawn to painting as a teenager – his daughter, following our interview, shared his beautiful 1968 painting of two offshore oil rigs extending into a picturesque mostly gray sky.

“We would sit up there at the table together and there’d be a topic or someone asking something and I’m thinking, ‘Oh boy. I hope Roy can answer,’” Wilson recalls of her PERC chairwomanship. “I look over and he’s making this gorgeous doodle. He’s doodling constantly on the notepad and, of course, listening.”

Painting, writing (including science fiction and poetry) and spending time with his wife and their family – the couple has four adult children – are part of Willis’ retirement plans. Surely, life’s next chapter will involve an adjustment while also allowing time to look back on some memorable years.

“It was incredibly great. I can’t describe it any other way,” Grace Willis says. “I enjoyed the time I got to work with my dad.”