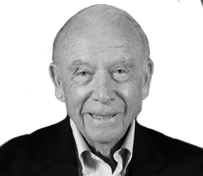 Sam McTier lives in Propane. His house is in Chicago, but in reality the industry’s nearly 86-year-old eldest statesman lives in a kind of virtual Propane Community.

Part of what that means is that when McTier, who says he works harder than he ever has, gets up at the crack of dawn, “I think about what’s going on in the industry and what I should be doing. I’m on all these committees; I love to do it and it’s interesting. I work every day as if I were running a big corporation.”

McTier has worn many propane hats: engineer, entrepreneur, salesman, safety expert, industry association official. He still wears them all well, especially the last two. Mostly, though he’s truly someone who believes the propane industry is his extended family and that what’s important is doing what he can to make that family sounder, stronger and happier.

The National Propane Gas Association’s former chief staff executive president Dan Myers says, “I’ve never known him not to do whatever it takes to help the industry. He doesn’t do it for glory. He doesn’t want to be in charge. He just wants to help.”

The El Paso native and gifted musician says, “”Over the years I’ve talked to and met everybody. It’s been so interesting to meet all these people and keep track of them.” Then he’s off on a story about the conference in Las Vegas when the guy at the podium asked how many in the audience were part of family firms, and “I would say 90 percent raised their hands.”

He makes clear he likes that family quality, likes that so many have started small.

“I’ve watched it all. I’ve seen many millionaires made. Watching that happen, watching the success of a huge number of people, I vicariously enjoy every moment. It’s a wonderful thing to know people doing well and who so often have done it with limited resources. I’ve probably met more propane marketers at their place of business than anyone in history. I think about them all the time. That’s my life, the propane industry.”

As LP Gas said four years ago, McTier is “always there, always been there, everywhere.” You might quibble with “always been there.” He didn’t know Walter Snelling, though the other Hall of Fame inductees have all been friends and, true, Sam didn’t get started until the late 1940s.

We might also fine-tune “everywhere.” He’s not going to this year’s World LP Gas Forum in Bali, though he won that group’s Distinguished Service Award in 2006. Yet, if there’s a gathering in this country where people are talking propane, Sam and Ginny McTier will be in the house, as was the case with Ann McTier before Sam’s long first marriage ended with Ann’s death.

The former RegO sales representative later owned and operated an equipment distribution company that bore his well-known name. A competitor bought that business not long before Sam started Propane Technologies, which sells a couple of his own patented innovations. He also does a little consulting.

Mostly, though, McTier’s days and part of his nights are taken up with work on those perpetual committees, including Safety, Technology and Standards and the Propane Education Research Council.

It may be an overused term these days, but Sam McTier truly is a servant leader. It also seems, as fellow inductee John Wallace notes, that “there is no finer guy in the industry.”

Much of what others celebrate in McTier is personality. He likes and cares about people and how they’re treated. In an interview he effortlessly shifts into Japanese to approvingly demonstrate how they don’t yell; they request and this is a good thing. He says, “Treating people nicely is the way to go.” He learned Japanese as a Navy officer in Nagasaki. His time there involved a trivial pursuit answer: Sam McTier played lead violin in a Japanese string quartet that made a classical record in Nagasaki in the early 1950s.

His endorsement of the harmony sought in Japan jibes with a McTier admission that he doesn’t like conflict. He notes that a personality test confirmed that fact, which makes it all the more remarkable that he’s fearless speaking his truth.

An LP Gas feature four years ago noted that Sam was the lone yea against 88 nays in his effort to get his NPGA board colleagues to approve cabinet heaters. Today McTier says he thinks that long-sought approval is “maybe six months” away. He still believes the product will be safe and bring the propane industry a new, untapped market. When you ask him what’s happened with the cabinet heater in the last years,.

Safety remains a primary McTier focus. As Dan Myers notes, “In terms of moving the needle, his major contribution is safety standards. (NFPA) Rule #58 – Sam has read it maybe 100 times and he’s the quickest to clean up the standard.”

Sam says his longevity has taught him indisputable truths when it comes to keeping industry employees and customers safe.

“Safety is a real serious thing to me. When there is a serious accident, people are inclined to think it was a fluke. I’ve learned flukes happen again,” he says.

Industry colleagues who have known him for decades love to poke fun at his penchant for talking. He has never given a succinct reply to an important business question, they joke. No matter what the subject, his Energizer Bunny-like zeal always generates answers with  explanation that is richly detailed in historical background and personal anecdotes.

In that 2008 piece, McTier said he was concerned about propane companies coasting and not being sufficiently determined to find new customers. He isn’t backing off that stance now.

“I still feel that way. There is an awful lot of coasting. A lot of companies just take care of what they have. Inspiration is needed in marketing. We’re making efforts but we need to do more,” he says.

Which is the Sam McTier way: doing more every day to strengthen the community – the extended propane family – that you care about.

“We’re so lucky to have NPGA and PERC. Our organizations are fantastic,” Sam says with feeling. “I really think our industry is improving.”

Assuming that’s the case, Sam McTier will find a goodly share of the reason for that if he looks in a mirror.