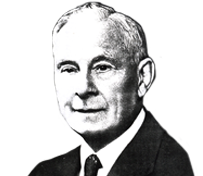 Walter Otheman Snelling quite simply founded the LP gas industry. The Allentown, Pa., chemist was the one who distilled the treasure and pointed most clearly toward a future in which propane was a clean, reliable energy alternative rather than a waste product or chemistry lab curiosity.

Others, like Frank Peterson, worked the territory and Snelling collaborated to good effect with a number of them. But Snelling was indisputably at the center of the creation.

The foundational story has been told many times, but it’s strong enough to support another repetition. Snelling, alumnus of Harvard and Yale and one of the nation’s few Ph.D.s, was in Pittsburgh with a U.S. geological survey unit, later part of the U.S. Bureau of Mines. His quality as a problem solver wasn’t a secret and it drew a horseless carriage driver into Snelling’s office to complain he didn’t get all the gasoline he paid for at a nearby early service station.

“My father took a glass gallon jug with a cork, went to the gas station, bought a gallon of gasoline and on the way home the cork kept popping out. So, of course it took him 10 seconds to figure out there were volatiles in there that were under pressure and were disappearing.

“He analyzed what those were and explained to the motorist. Then as a scientist he said to himself, ‘What are the implications?’ He quickly deduced that what was happening was that after the gasoline and coal oil were removed light hydrocarbon fractions remained.

“They weren’t suitable for gasoline, but he recognized they had high energy and could solve another problem: Most of the illuminated world was then on gas light and most people didn’t have access to a main. My father realized that if he could convert this fractionate into a liquid, he would have something with tremendous energy density, which could be turned back into a gas and used for lighting or heating.”

That’s the product Walter Snelling soon distilled, a eureka achievement that moved The New York Times on March 31, 1912, to publish an article that read in part: “Camping out parties and bungalow residents can now have a lighting plant of their own. Dr. Walter O. Snelling, consulting chemist of the U.S. Bureau of Mines … has developed a liquid gas and a steel bottle will carry enough to light an ordinary house for three weeks or a month.”

What happened next is complicated. Snelling was first and foremost a scientist, but he possessed a modest entrepreneurial dimension. Along with Peterson and several other propane pioneers, Snelling was involved in the incorporation of the American Gasol Co. Their first customer, in 1912, was John Gahring, a farmer in Le Boeuf, Pa., not far south of Erie.

In Gahring, Snelling didn’t simply gain propane’s first retail customer. In 1919 he married the farmer’s 18-year-old daughter Marjorie, and she eventually became the mother of the Snellings’ nine children including Charles and the late Richard Arkwright Snelling, the 76th and 78th governor of Vermont.

Walter Snelling, who held close to 200 patents and in the early years of the 20th century was one of the foremost explosives experts, wasn’t destined to be the business leader of the propane industry. After he and his associates struggled with capitalization and marketing, the critical patent rights were sold to Frank Phillips of oil industry giant Phillips Petroleum.

Charles Darwin observed, “My father later complained to Frank, ‘You’re making a billion dollars on my invention and you paid me $50,000. You should have paid me much more.’ Frank said, ‘Doc, I shouldn’t have paid you anything. I didn’t make any money on this until after the patents expired.’

“My father didn’t make it into a profitable business and I don’t think Frank Phillips did for years. My father’s view was that the invention was 99 percent. From my perspective, the invention is 25 percent and 75 percent is getting it to the customer.”

Charles Snelling has a complex perspective. The octogenarian has been a scientist, multiple patent holder, venture capitalist, writer, and until this year the chair of the Metropolitan Washington Airports Authority. He has long celebrated his father, yet he also wrote in a New York Times Opinion-page piece in December that his father, as well as being a genius and a pioneering inventor, “was also a perfectionist beyond all imagination.”

The son says that when he asked his father a question of some weight, Walter would take Charles by the hand to the basement lab where he would prompt his son to engage in his own experimentation, the quality of which the man who captured propane in a bottle would  assess very rigorously.

There were negative effects of Walter’s perfectionism and Charles Snelling detailed them in the Times piece (http://brooks.blogs.nytimes.com/2011/12/07/the-life-report-charles-darwin-snelling/). Yet, in a phone interview with LP Gas, the son also said he stands by his words of nearly a half century ago when, after Walter’s death in 1965, Charles wrote: “He was an individual with ability, persistence, and unusual powers of observation and insight, always driven by an insatiable curiosity and striving for perfection… (yet he) lavished on his family, the same energy, time, attention, and individuality that he gave to every task, and I think it would be fair to say that that he intended that his family  should be the real devotion of his life.”

The evidence reveals that Walter Snelling was an American original and a pioneering genius. He was also a complicated man who had a profound impact on our world, most especially on the propane industry that he played an absolutely indispensable role in bringing to life.